In 1993, Sandia National Laboratories installed an Intel XP/S 140 Paragon super- computer, which claimed the No. 1 position on the June 1994 list. With 3,680 processors, the system ran the Linpack benchmark at 143.40 giGflop/s. It was the first massively parallel processor supercom- puter to be indisputably the fastest system in the world. The operating system, OSF-1, supplied by Intel for the Paragon failed to scale well. Sandia en- gineers ported SUNMOS, their lightweight kernel, to the Paragon. SUNMOS and associated runtime soft- ware became the basis of operations on the ma- chine. At the same time, Sandia began to develop a second-generation lightweight kernel called PUMA, which eventually replaced SUNMOS and which Intel and Sandia would later use as the basis for Cougar, the lightweight kernel that powered ASCI Red.

The Paragon XP/S was a productized version of the experimental Touchstone Delta system built at Caltech, launched in 1992. The Paragon series was based around the Intel i860 RISC microprocessor. Up to 4,000 i860s were connected in a 2D grid. The system architecture was a partitioned system, with the majority of the system comprising diskless compute nodes and a small number of I/O nodes interactive service nodes. Since the bulk of the nodes had no permanent storage, it was possible to "Red/Black switch" the compute partition from classified to unclassified by disconnecting one set of I/O nodes with classified disks and then connecting an unclassified I/O partition. 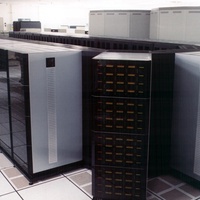