In June 2011, a Japanese supercomputer capable of performing 8.16 quadrillion calculations per second (petaflop/s) became the new number one system, putting Japan back in the top spot for the first time since the Earth Simulator was dethroned in November 2004. The system, called the K computer, is at the RIKEN Advanced Institute for Computational Science (AICS) in Kobe. The K computer is named for the Japanese word "kei", which stands for 10 quadrillion.

The K computer, built by Fujitsu, originally combined 68,544 SPARC64 VIIIfx CPUs, each with eight cores, for a total of 548,352 cores—almost twice as many as any other system at the time. The K computer was also more powerful than the next five systems on the list combined.

In November 2011, the K computer retained the No. 1 position and became the first computer to top 10 petaflop/s after a full build-out using 705,024 SPARC64 processing cores. The upgraded system achieved an impressive 10.51 petaflop/s on the Linpack benchmark. The K computer was also one of the most energy-efficient systems on the list. 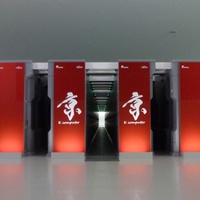