In June 2008, the new No. 1 system was an IBM system installed the U.S. Department of Energy’s Los Alamos National Laboratory and called “Roadrunner.” The machined achieved performance of 1.026 petaflop/s — becoming the first supercomputer ever to reach this milestone. At the same time, Roadrunner was also one of the most energy efficient systems on the TOP500.

The Roadrunner system is based on the IBM QS22 blades which were built with advanced versions of the processor in the Sony PlayStation 3. Roadrunner differed from many contemporary supercomputers in that it was a hybrid system, using two different processor architectures. The design consisted of AMD dual-core Opteron server processors with an IBM PowerXCell 8i processor attached to each Opteron core. Roadrunner had been in development since 2002 and went online in 2006. Due to its novel design and complexity it was constructed in three phases and became fully operational in 2008.

By November 2008, Roadrunner had been slightly enhanced and posted a Linpack benchmark performance of 1.105 petaflops. This allowed the system to narrowly fend off a challenge by Jaguar, the Cray XT5 supercomputer at Oak Ridge National Laboratory. 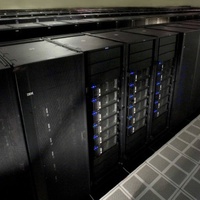