TaihuLight is currently up and running at the National Supercomputing Center in the city of Wuxi, a manufacturing and technology hub, a two-hour drive west of Shanghai. The system will be used for various research and engineering work, in areas such as climate, weather & earth systems modeling, life science research, advanced manufacturing, and data analytics.

The supercomputer was developed by the National Research Center of Parallel Computer Engineering & Technology (NRCPC), the same organization that designed TaihuLight’s predecessor, the Sunway BlueLight system, which is installed at the National Supercomputing Center in Jinan. BlueLight is a 796-teraflop supercomputer, which was deployed in 2011.

BlueLight is powered by an older version of the ShenWei processor, a third-generation 16-core chip, known as the SW1600, which tops out at about 140 gigaflops. In the five years since that system came online, NRCPC developed a much more powerful processor, the SW26010, a 260-core chip that can crank out just over 3 teraflops. TaihuLight has a single SW26010 in each of its 40,960 nodes, which adds up 125 peak petaflops across the entire machine (more than 10 million cores). Linpack, of course, is going to leave some FLOPS on the table, but 93 petaflops represents a respectable 74 percent yield of peak performance. 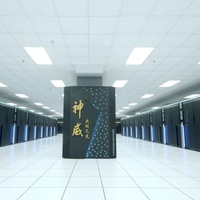