The 36th edition of the TOP500 list confirmed the rumored takeover of the top spot by the Chinese Tianhe-1A system at the National Supercomputer Center in Tianjin, achieving a performance level of 2.57 petaflop/s. The event marked the first time a Chinese system topped the list.

Rumors about the performance of Tianhe-1 (meaning River in Sky) began to circulate in October 2010 and were confirmed when the system was unveiled at HPC 2010 China that month. Designed by the National University of Defense Technology (NUDT) in China, the supercomputer was used to address research problems in petroleum exploration and the simulation of large aircraft designs.

Tianhe-1 is a hybrid design with 14,336 Intel Xeon processors and 7,168 NVIDIA Tesla GPUs used as accelerators. Each node consists of two GPUs attached to two Xeon processors. Although the processors were produced by American firms, the Tianhe-1A interconnect was developed by Chinese researchers and was able to handle data at about twice the speed of common commercial interconnects. 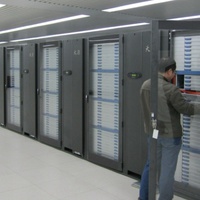