According to NUDT, Tianhe-2 will be used for simulation, analysis, and government security applications. With 16,000 computer nodes, each comprising two Intel Ivy Bridge Xeon processors and three Xeon Phi chips, it represents the world's largest installation of Ivy Bridge and Xeon Phi chips, counting a total of 3,120,000 cores.[3] Each of the 16,000 nodes possess 88 gigabytes of memory (64 used by the Ivy Bridge processors, and 8 gigabytes for each of the Xeon Phi processors). The total CPU plus coprocessor memory is 1,375 TiB (approximately 1.34 PiB). 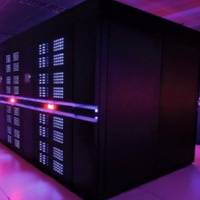