The eighth TOP500 list was topped by a 2,048 processor CP-PAC built by Hitachi and installed at the Center for Computional Science at the University of Tsukuba in Japan. The system, which was a non-commercial extension of the Hitachi SR2201, achieved 368.20 gigaflops in running the Linpack benchmark. The CP-PACS Project aimed to develop a massively parallel computer designed to achieve high performance for numerical research of the major problems of computational physics. Planning started in the summer of 1991 and a proposal to the Ministry of Education, Science and Culture was approved in the spring of 1992 as one of projects of the Ministry’s Program for New Development of Academic Research. The five-year project formally started in April 1992.

The development of the CP-PACS parallel computer involved a close collaboration of the computer scientists and physicists of the project. Joint discussions were made on the computational needs of the physicists, on the one hand, and the possible architectures which could meet them within the limits of what would be technically feasible, on the other hand. The basic design of the CP-PACS computer was reached as a result of this collaboration. For manufacturing of the CP-PACS computer, Hitachi Ltd. was selected in the summer of 1992 by a formal bidding process. Project members worked in close collaboration with Hitachi Ltd. to develop the computer. 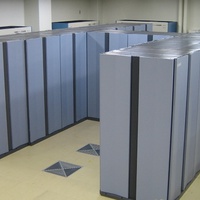